Dubai places curbs on hotels and hospitals as cases surge 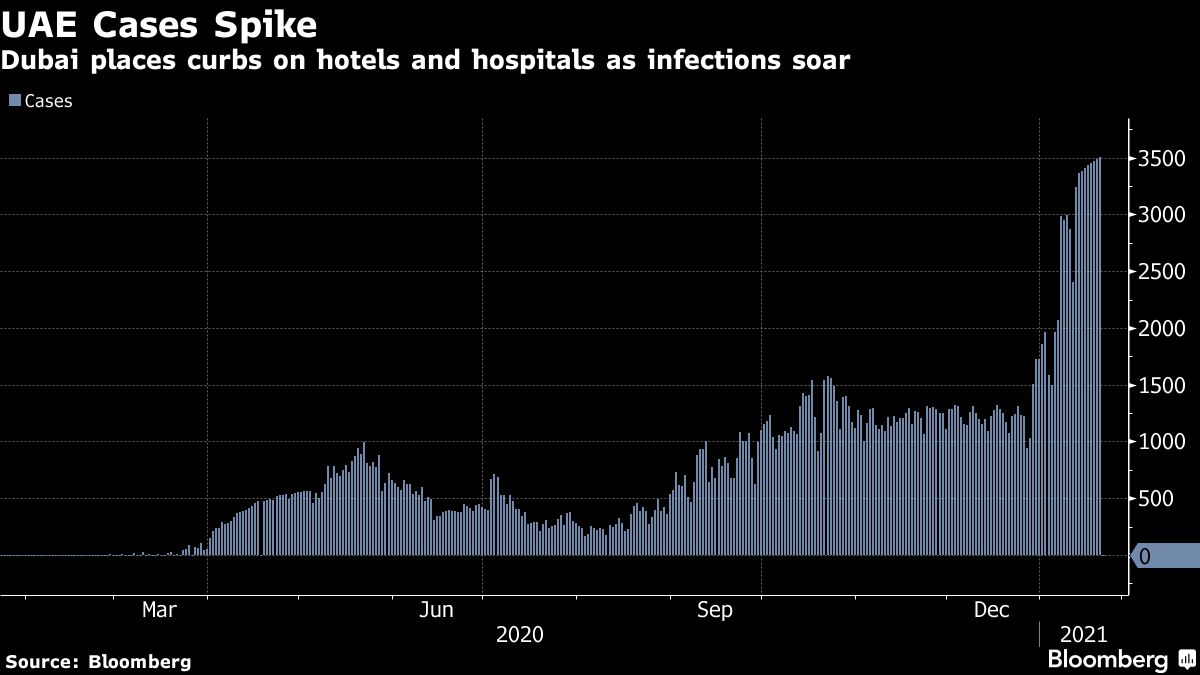 Published 21 Jan,2021 via Bloomberg Markets - Dubai ordered hotels and restaurants to put entertainment activities on hold and asked hospitals to cancel elective surgeries amid a record daily surge in coronavirus cases in the United Arab Emirates.

Dubai’s Department of Tourism and Commerce Marketing called for a temporary hold to all entertainment activities from Jan. 21 until further notice after inspections showed “an increase in number of violations,” it said in a circular.

The city’s health authority has also asked government and private hospitals to suspend “all elective therapeutic surgeries that require deep sedation or general anesthesia,” according to a circular published on Jan. 20. The order, which aims to ensure medical facilities have the capacity to deal with a possible surge in hospitalization, comes into effect from midnight on Thursday until Feb. 19 and could be extended.

The UAE is battling a rise in infections as tourists escaped lockdowns across Europe for the country’s sunny weather and beaches during the winter. A travel corridor with Britain had also brought in scores of holidaymakers, but this was shut as cases spiked.

The DFM General Index dropped as much 1.7% on Thursday, the most among major equity benchmarks in the Middle East and North Africa, moving in the opposite direction to shares in most emerging markets. It’s still up about 10% this year, after a rally boosted by the vaccination program and hopes of a pick up in tourism.

The UAE, of which Dubai is the second-largest emirate, has been conducting one of the world’s fastest inoculation programs with more than 2 million vaccine doses administered to a population of about 10 million people.

With almost 24 million tests conducted so far, the UAE has also led the way on testing per-capita. While infections have spiked, deaths remain low in a country made up largely of working age expatriates. The country has reported about 264,000 infections and 762 deaths so far.

The UAE’s extensive vaccination campaign is especially key to the business hub of Dubai, whose economy relies on travel and tourism. The emirate is home to more than 3 million people and aims to vaccinate 70% of its residents by the year-end.

Meanwhile, the UAE aims to cover 50% of its overall population by April.

(Updates with shares in fifth paragraph)

For more articles like this, please visit us at bloomberg.com