Photo: Vendors at the local fruit and vegetable market wear protective masks and bag produce in order to take protective measures against the COVID-19, on March 20, 2020 in Fethiye, Turkey. Photo supplied by Yvonne Maffei

Living abroad amid a pandemic: My Halal Kitchen’s Yvonne Maffei finds comfort in strangers while feeling ‘completely alone’ in Turkey

The founder of popular blog My Halal Kitchen, the American Yvonne Maffei, finds herself feeling completely alone in Turkey as the COVID-19 hit. But there is a quiet calm, she writes, an overall acceptance of what is and what needs to be done to protect everyone.

I’ve been living in the beautiful Turkish coastal town of Fethiye for a little over a year. In fact, at the one year mark, I was just about to make the trip back home to Chicago to settle a few important things when the COVID-19 outbreak occurred in China.

The global pandemic came to light when friends from Chicago announced they would be visiting me here in southern Turkey. They were headed to Istanbul for business and then on to Italy for vacation. In between, they would sojourn down slowly to Fethiye by taking the majestic drive along the Aegean.

I had seen the coronavirus outbreak in China and worried about them traveling, but since they weren’t going to Asia, I tried not to overthink the danger. Something in my gut, however, told me this was going to get much worse.

I was glued to the news mostly because of their travels, but also because suddenly the virus began to spread in Italy, where I still have family in Milan and Sicily. Things were not looking good and I warned my friends to cancel plans to go on to Italy and to instead stay in Turkey since we had no cases reported here at the time.

They came down to Fethiye, had a fabulous time and invited me to join them in Istanbul for the last leg of their trip. They headed back north and I was to join them a few days later.

The very same day they left, one case of COVID-19 was reported in Istanbul. I immediately canceled my plans to go and encouraged them to get back to Chicago as soon as possible in case borders would be closed and flights cancelled. They did just that and ended up getting home fine, even quarantining themselves for two weeks upon arrival.

I should have been relieved, but this is when the panic within me really began to unleash itself. I felt completely alone in a foreign country knowing intuitively that I wouldn’t be able to get home any time soon. My mind told me that I should get on a plane before borders closed, but my heart said I should stay put to avoid getting sick from traveling and spreading it to others.

I asked my mom what I should do and she responded with words I will never forget: “People are dying. I feel like we’re watching the end of the world.”

I broke down reading that text from my mother. It tore my heart into a thousand pieces. She was alone, yet told me to stay in Turkey for both her benefit and for mine. When I talked to her on the phone, I knew that she was fighting back some really heavy tears.

Next, an email from my dad arrives stating the harsh reality: “If you don’t come home now, it could be 18 months to two years before we see each other again.”

I felt sucker-punched, as he was referring to the U.S. Department of State’s advisory that “U.S. citizens who live abroad should arrange for immediate return to the U.S., unless they’re prepared to remain abroad for an indefinite period.”

Cases of the coronavirus were going up in the U.S. and in Italy like crazy. For the first time, I thought there could be a very good possibility that I may never see my parents again.

I then received word from an industry colleague in Barcelona that he had just been diagnosed with the virus. This was now all way too close to home.

I finally succumbed to staying put in Turkey.

GROCERY RUN TO THE OPEN MARKET

Instead of packing suitcases, I read everything I could in English about the situation in Turkey so as not to feel as vulnerable, including all of the expat groups on Facebook. One case of COVID-19 in the country quickly became six cases and then suddenly we had over 1,000. People were still out walking together, kids were playing in the streets in groups. It was very unsettling and I feared another Italy would be upon us.

When I eventually decided that I needed to leave the house for supplies, I armed myself with gloves, a face mask, packets of kolonya wipes (a traditional lemon-scented hand sanitizer in Turkey) and a hygiene plan for how to process all my goods when I got back home. I felt like I was going out in the midst of war where I would have to master the art of dodging an airborne ghost at every turn.

My first stop was the open market, or pazar. Normally a bustling enterprise, it was eerily sparse.

I instantly questioned my own sanity for going. My anxiety subsided a little when I saw almost all of the produce bagged up for less touching and quicker pick-up, which was great. Some items, however, as delicate and beautiful as the fresh strawberries I was gawking over two weeks ago now seemed to throw me into full-on panic, as they were totally uncovered and exposed. I had images of virus emojis landing on the fruits and it scared me to death. Again, vulnerability seemed to creep in, and that feeling of walking through an alternate reality was completely overpowering. “This is the stuff that sci-fi movies are made of”, I thought to myself.

At the grocery store, the shelves were quite full of all essentials like toilet paper, napkins, shampoos and other personal care products. Very different from what was happening back home. What was not available were cooking ingredients or cleaning essentials like flour, white vinegar, instant yeast and bleach. This gives a clear picture of what most people will be doing under quarantine: baking bread and cleaning their homes.

Back home and safely indoors, I began to observe subtle changes in my neighborhood. It’s quieter than usual, so the sounds of my closest neighbors have become the biggest comfort. While sitting on my balcony, my heart is at rest by watching a young mother bounce her baby in her arms as she talks on the phone; another woman my mother’s age sweeps the stairs of her apartment building nearby and it oddly makes me feel like everything is normal; seeing laundry hung by Turkish housewives gives me a sense of stability of everyday life going on as usual.

Reminders do creep in that things are certainly not normal and that if we’re not careful, things could go the other way.

The local government plays an old Turkish song every afternoon over loudspeakers that is meant to boost morale, repeating “better days are coming, just be patient”. I watch elderly folks walk the streets or ride their bikes with face masks or scarves over their mouths. “Good”, I think to myself, “people are being careful”. I still wish they would be at home instead...

Every evening after the isha adhan in my neighborhood, the muezzin spends several long minutes to make du’a for the safety and security of the nation and of the ummah in the midst of the coronavirus. It’s at once comforting and painfully surreal because it’s like nothing I’ve ever experienced.

In Turkey, there is a quiet calm, an overall acceptance of what is and what needs to be done to protect everyone. Everything came to a halt in Fethiye last weekend (March 27) when both the national and local government imposed curfews and lockdowns that closed public spaces such as parks, seaside venues, and banned travel by car and air in and out of most cities. It’s not easy where the year-round climate affords everyone an active outdoors lifestyle, but somehow people complied with the rules relatively quickly.

I feel tucked away in the safety of my own world of cooking, cleaning, writing, and attending to my other aspects of a normal work-from-home routine which I’ve been doing for over ten years already.

We are updated in both English and Turkish about how to call for help, how to get tested for the virus, if necessary, which is free for citizens and foreigners at the government hospital. We pray we never need it.

I’m hanging onto the hope that Turkey will not suffer the same fate as Italy or the U.S. because of the lessons learned from those places, but my heart is heavy as I type those words.

I never thought I would be referencing my own country from a distance as if it’s a war zone with my family trapped inside. May Allah swt protect everyone.

Things will never quite be the same after COVID-19: How we work, how we live and what we prioritize will hopefully all be for the better. I certainly don’t think I’ll ever take my blessings for granted again particularly when it comes to appreciating the value of home and the people in the places where I left my heart. 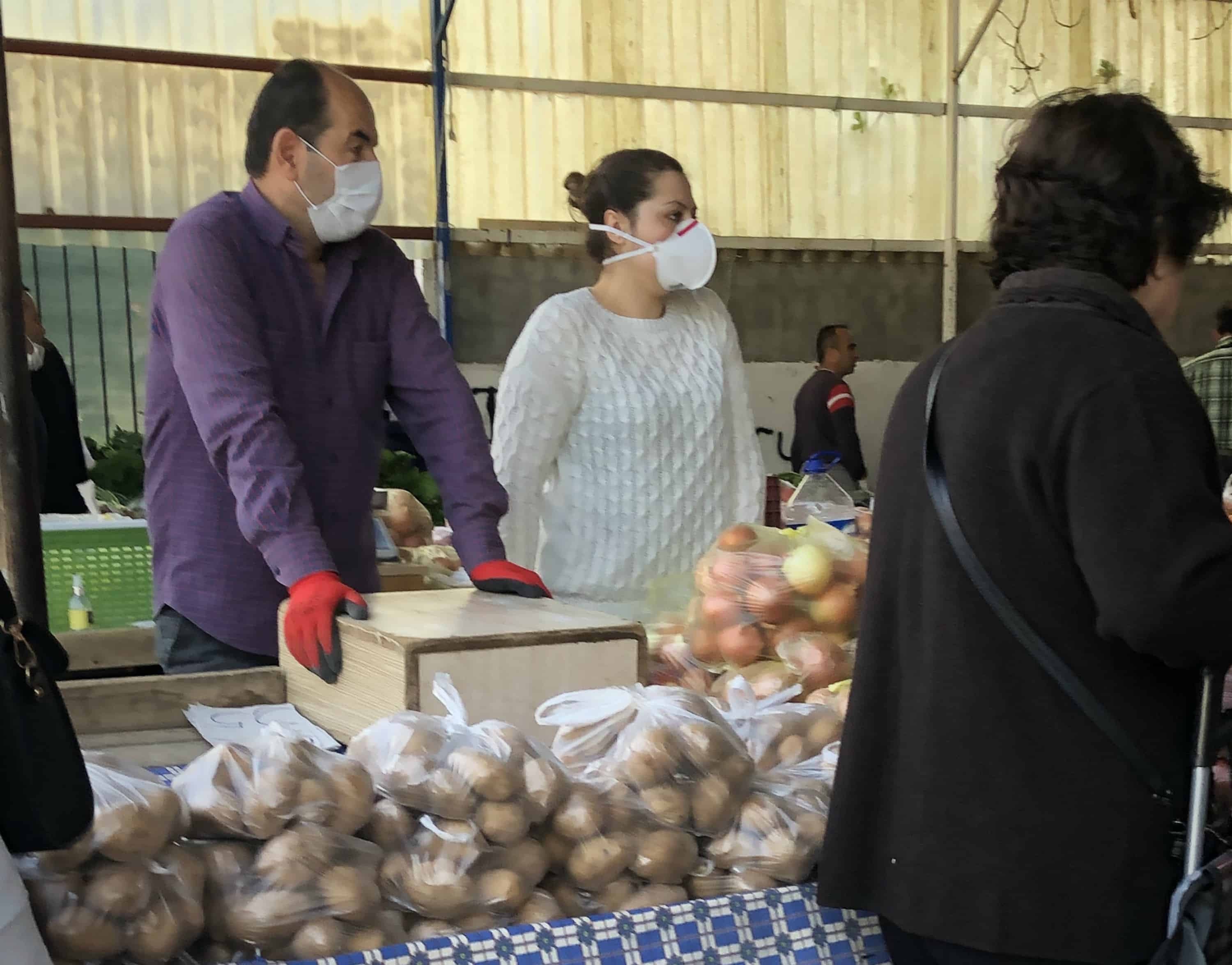 Living abroad amid a pandemic: My Halal Kitchen’s Yvonne Maffei finds comfort in strangers while feeling ‘completely alone’ in Turkey
The founder of popular blog My Halal Kitchen, the American Yvonne Maffei, finds herself feeling completely alone in Turkey as the COVID-19 hit. But there is a quiet calm, she writes, an ov..
https://food.salaamgateway.com/story/living-abroad-amid-a-pandemic-my-halal-kitchens-yvonne-maffei-finds-comfort-in-strangers-while-feeli